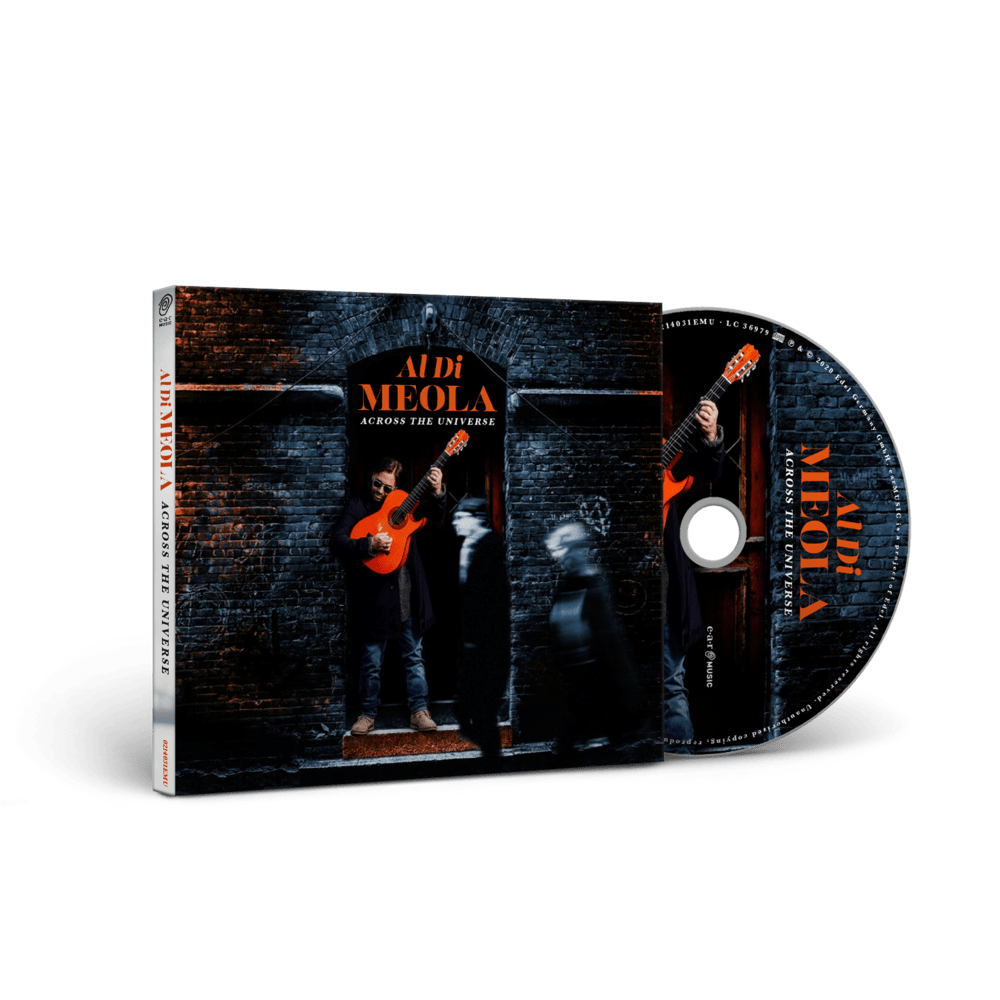 Across The Universe (CD)

Al Di Meola’s exquisite mastery of the fretboard is equal only to his appreciation of the Beatles’ legacy that has inspired generations of both musicians and music fans with their famed recording catalog. A retrospective of Al Di Meola’s nearly 50-year acclaimed career expressed through his virtuosic arrangements of 14 Beatles songs, Across The Universe journeys alongside one of America’s foremost guitarists as he revisits classic hits and more obscure tunes written by the ingenious Fab Four who have helped define the man he is today.

Adding to his lauded recording collection of more than 30 solo albums and numerous acclaimed collaborations with the likes of Chick Corea, John McLaughlin, Stanley Clarke, Paco De Lucia and many others, Across The Universe is yet another masterpiece showcasing Al Di Meola’s fascination with complex rhythmic syncopation combined with provocative lyrical melodies and intricate harmonies. Beatles fans, guitar-heads, and music lovers alike can expect the unexpected upon venturing into the world put forth by Across The Universe. To commemorate the singular life of John Lennon, Al Di Meola reenacts the famous Lennon cover for his 1975 solo album Rock ‘n’ Roll for the artwork for Across The Universe.

Al Di Meola is a living legend celebrated for pioneering a unique style of impeccable guitar technique combined with a sophisticated global musical language that’s captured the hearts of audiences across the world. A GRAMMY Award-winner, he’s garnered three gold albums while selling more than six million albums in worldwide sales. His collaborations with artists such as Paul Simon, Phil Collins, Stevie Wonder, Jimmy Page, Santana, Steve Winwood, Herbie Hancock, Frank Zappa, Luciano Pavarotti, and others have elevated Al Di Meola to become a household name. Traversing divinely across multiple genres including flamenco, Latin, fusion, jazz, rock, and world music, Al Di Meola is a vivacious tour de force always redefining the boundaries of what’s possible on a six-stringed instrument. Across The Universe is no different than his most decorated recordings with his arsenal of a large ensemble bringing creative reinterpretations of Beatles songs to astounding heights.

“I really credit the Beatles for the reason why I play guitar,” says Al Di Meola. “That was a major catalyst for me to want to learn music, so their impact was pretty strong.”

Al Di Meola employs a wide lens on Across The Universe with lightening-speed electric guitar orchestrations balanced with lavish acoustic arrangements. The debut single Strawberry Fields Forever from Across The Universe (released today, January 17) is a fiery electric guitar fueled stunner backed by a red-hot rock band. Epic rock ‘n’ roll covers are sprinkled throughout the album, including the visionary take on the album opener Here Comes The Sun, as well as a riveting Hey Jude and Golden Slumbers Medley. Al Di Meola’s acoustic fingerpicking soars on Dear Prudence and Norwegian Wood, while he ventures to a jazz fusion aesthetic on Till There Was You.

Across The Universesimmers to a diverse set of mid-tempo grooves on Mother Nature’s Son, Yesterday, Your Mother Should Know, I’ll Follow The Sun, and Julia. Al Di Meola features a lovely solo performance on Here, There And Everywhere. Across The Universe finishes with a short, but very sweet melodic version of Octopus’s Garden.