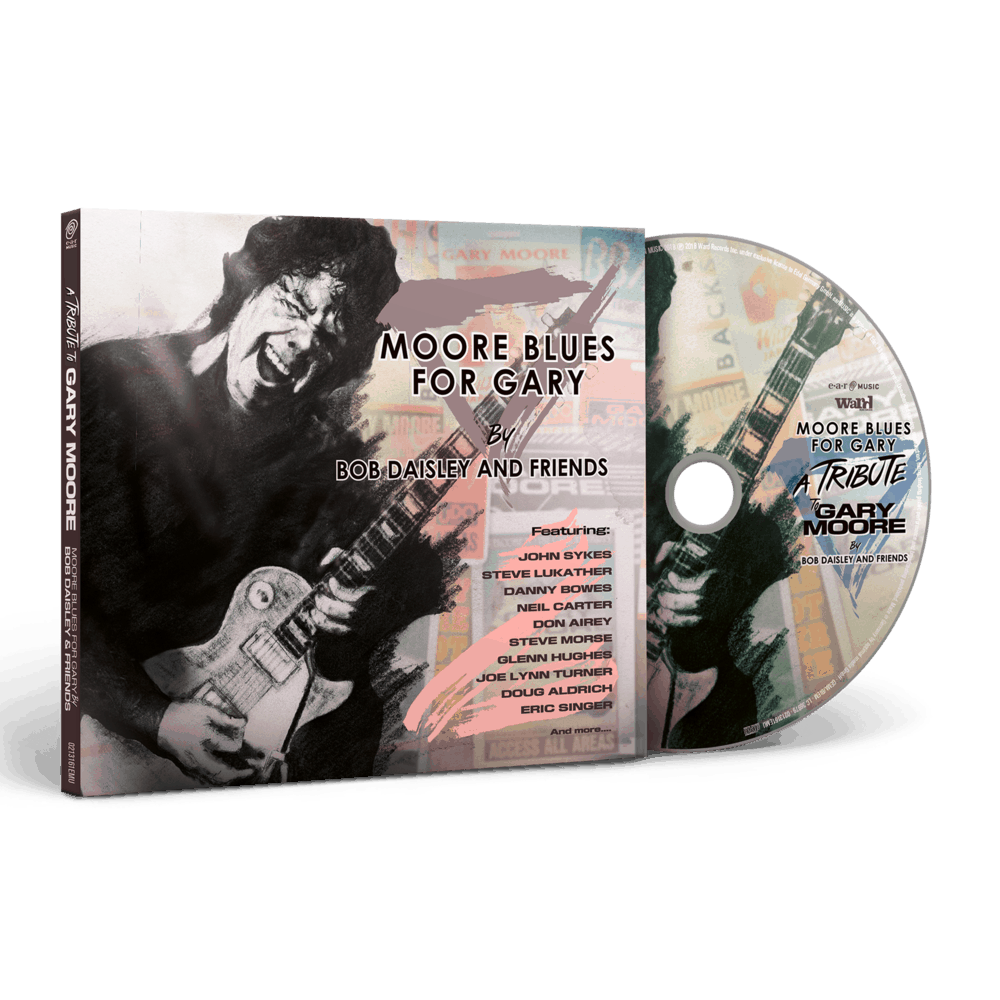 Moore Blues For Gary - A Tribute To Gary Moore (CD)

The sky was crying when Gary Moore passed away on 6th February 2011.  From Thin Lizzy to Colosseum II, together with his solo hits ‘Parisienne Walkways’ and ‘Out In The Fields’, Gary influenced a whole generation of guitar players and guitar playing.

The bass player/producer Bob Daisley had played with Gary since the 1980's, and is known for suggesting to Gary that he should make a blues album - the rest is history, ‘Still Got The Blues’ was an immense hit, followed by a series of classic modern blues albums. Bob, also known for his contributions to Rainbow and Ozzy Osbourne, was the driving force behind “Moore Blues For Gary”.

“In my opinion, Gary was one of the best guitarists who ever lived”, says Bob Daisley. “It was an honour for me to have worked with him and to have known him so well. When Gary passed away in 2011 the world lost one of the all-time greats. I don’t think that enough was said or done at the time to acknowledge the loss of such a great player so I took it upon myself to pay personal tribute to the man and record some new versions of his music, mostly from his blues catalogue.

I asked many members of the Gary Moore family tree, and some other great players, to contribute to the project. The response was not only encouraging, but very moving. It seems that the name Gary Moore is also synonymous with the words ‘respect’, ‘honour’ and ‘greatness’. I didn’t set out to recreate anything that Gary had done, or to compete in any way, these arrangements and performances represent a ‘hats off’ to Gary and nothing more. Long live the memory of Robert William Gary Moore. Yes, he was an­other ‘Bob’ - something that I wasn’t aware of for all of those years that I worked with him. I feel such gratitude towards the people who contributed to this album and I’m honoured to have worked with them all.”

John Sykes (ex-Thin Lizzy, Whitesnake) makes a triumphant return after a long absence with an uber-emotional rendition of ‘Still Got The Blues’, with the soulful vocals by Daniel Bowes (Thunder) complementing each other.

Gary's sons Jack and Gus are also involved, playing guitar and singing on ‘This One's For You’, showing that the ‘Blood Of Emeralds’ still runs their veins.

During his blues days, Gary made two albums to thank the guitarists that made him who he was: “Blues For Greeny” for Peter Green of Fleetwood Mac, and “Blues For Jimi” for Jimi Hendrix. Now this is his turn to be rewarded with an album full of love and respect.  We still got the blues for you.