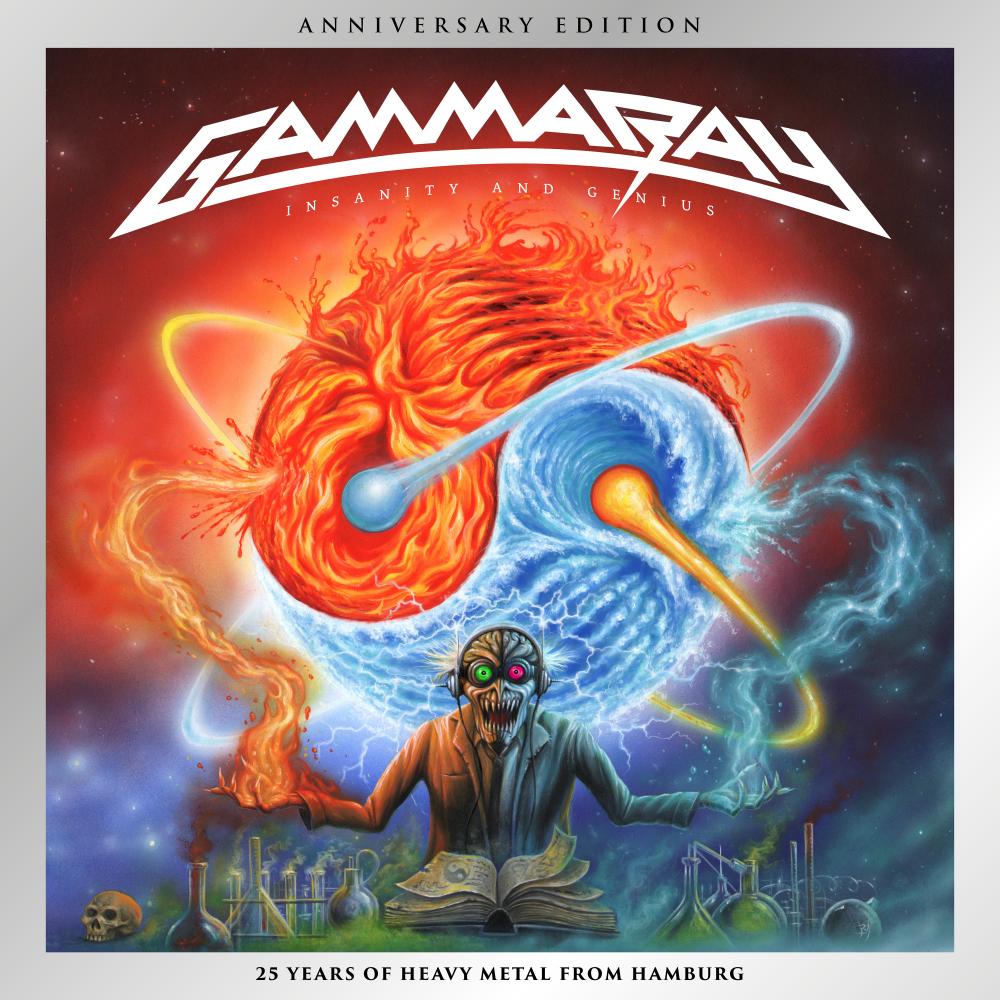 Their third studio album “Insanity & Genius”, which arrived at the stores in late summer 1993, presented Gamma Ray from an even tougher and more experimental side than their 1991 predecessor release “Sigh No More” had done.
On top of that, an incisive line-up change had taken place in the Gamma Ray camp during the run-up to the production: drummer Uli Kusch and bassist Uwe Wessel had left due to personal differences and were replaced by Jan Rubach (bass) and Thomas Nack (drums), formerly of Lübeck band Anesthesia. Hansen: “Those two were used to much harder stuff from Anesthesia, but they fit in perfectly because we’d already seen a change of direction on ‘Sigh No More’ and were open to new ideas. And of course Jan and Thomas worked together excellently.”
Bassist Jan Rubach immediately contributed compositional inspiration and his remarkable songwriting skills, penning the title track and sections of the opener ´Tribute To The Past`, among others. Thomas Nack’s powerful drum style brought a fresh feel to Gamma Ray’s material, taking the band to occasionally almost brutal levels of hardness on “Insanity And Genius”.
Kai Hansen himself calls the recording “unusually colourful and experimental”. With that, the Gamma Ray founder is referring to the title track, the occasionally spacey, rocking sound on ´The Cave Principle`, and ´Heal Me` with its cabaret-like arrangement. By contrast, there are also typical Gamma Ray numbers such as ´Tribute To The Past` and ´Last Before The Storm`, which Hansen speaks of as “revisiting my Helloween past”. Another highlight on the album is the single release ´Future Madhouse` about the aftermath of the Gulf War, described by Hansen as “Queen on speed”: “´Future Madhouse` has that kamikaze mentality which was typical of us at the time.”
The song ´Gamma Ray`, cover version of a classic by German rock group Birth Control and obviously the namesake of the band from Hamburg, plays a significant role.
”Insanity And Genius” was a commercial success particularly in the Far East and the top-selling Gamma Ray album in Japan with almost 100,000 copies sold, missing a gold award by a hair’s breath. It was also the final studio recording featuring singer Ralf Scheepers, who left in 1994 to launch Primal Fear, Kai Hansen going on to replace him as the group’s lead vocalist.
The 2016 anniversary re-release of Insanity & Genius includes, along with the eleven original tracks remastered by producer/sound engineer Eike Freese (Dark Age, Deep Purple), additional demo material of ´Money`, ´The Silence` and ´Sail On`, an extended version of ´Gamma Ray` and a rough mix of ´Space Eater`, plus the Judas Priest cover ´Exciter` as well as live interpretations of ´Valley Of The Kings` and ´Heaven Can Wait`, which were recorded 2016 at the Chameleon Studios.